Ilker Soydan, PhD, CEO
While automation has been taking various industries by a storm, one sector that has not been revolutionized by its Midas touch is the healthcare arena. The challenges of increased costs, lower quality and lesser accessibility to the right medical equipment, especially when it comes to the case of providers or caregivers in healthcare, has dampened the situation even more. Despite knowing the potential of robotic systems and the quality that it brings to patient care, healthcare providers are reluctant to invest in the systems, as they do not have the sufficient budgets. This is where Netherlands-based MicroSure comes into play with their affordable robotic solution – MUSA, encouraging maximum robotic adoption in healthcare.

“Our target is to make MUSA affordable for our customers, and to ensure greater access of robotic equipment to hospitals,” begins Dr. Soydan, CEO of MicroSure. Explaining further on MUSA, he adds, “The robotic surgical system increases procedural performance, as the software scales the surgeon’s hand motions and lessens hand tremor, providing precision in handling.” The unique robotic solution, which is developed using regular micro-instruments, does not depend on expensive disposable add-ons. During a surgical procedure, the surgeon controls the two joysticks, known as masters that are attached to the operation bed. The signals are processed by the robot’s control cabinet system, and directed toward the surgical arms, or slaves, attached at the patient’s side.

MUSA “performs at the micro-scale of life”, where it functions in microsurgical procedures dealing with small scale of operations. The surgeon`s movement is scaled down tenfold, where, for every centimeter that the surgeon moves the joystick, the robotic arm shifts by one millimeter. “Using our robotic device, surgeons can suture structures that are less than one millimeter in diameter, which would otherwise be only possible by gifted and experienced surgeons”, remarks Dr. Soydan.

The robotic surgical system increases procedural performance, as it scales the surgeon’s hand motions and lessens the tremors with our software, providing precision in handling

Besides dealing with complexities on the surgical side, MUSA also improves a surgeon’s experience, by removing the discomforts associated with long periods of surgical procedures, allowing them to stretch and relax during a procedure.

MicroSure’s robotic system is well equipped to provide precision in small structures and procedures, offering better efficiency to the surgeons. The effectiveness of MicroSure’s MUSA can be best described through the example of the University of Maastricht in the Netherlands, where they perform critical microsurgeries such as the Lympho- Venous Anastomosis (LVA). These LVA procedures can be performed by MUSA, due to its ability to provide precision in such small structures or procedures.

What makes MUSA a game changer in the industry, is its versatile system that is compact, mobile, and developed around the normal workflow of the surgeon, where that person can use the microscope and micro-instruments of their preference. “MUSA is developed with the help of surgeons, for the surgeons, where we consider their suggestions on the shape of the product, the functionalities, and features that they require,” points out Dr. Soydan. “It is the only microsurgery robot that is CE certified, and possesses an advantageous rotational axis that mimics the suturing movement.”

The future looks promising for MicroSure, as the company plans to enhance MUSA by adding technological advancements to drive autonomous robots for repetitive movements, in order to help surgeons and obtain better patient outcomes. As a part of the expansion, MicroSure intends to commercialize MUSA in the US, Europe, Asia Pacific and across the globe. “We believe that there will be a conversion of manual skills into robotic procedures in the future, and we would like to be a part of this exciting development by providing the most intuitive system to fill the gaps in microsurgery”, Dr. Soydan concludes. 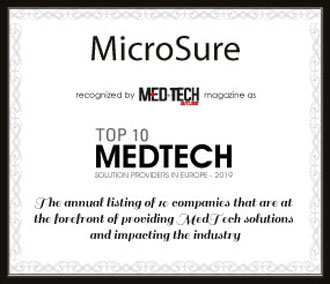 Description
MicroSure focuses on improving patient’s lives through their surgical robot for microsurgery –MUSA. The robot is designed in close cooperation with micro surgeons and engineers, specifically for microsurgical applications. MUSA provides great precision for micro surgeons, enabling new interventions that are currently impossible to perform by hand. MicroSure works in close collaboration with clinical key opinion leaders, industrial partners and quality and regulatory experts. The company prides itself in building on a network of clinical and technical advisors, including eminent surgeons from university medical centers worldwide with the Maastricht University Medical Center as a leading clinical partner