Benno Groosman, MScBA, CEO
The day in the life of an arthroscopic surgeon is mired with complexities. During the course of each surgery, they go back-and-forth between 10-20 minimally invasive instruments to reach difficult parts of the knee. Since the pre-bent instruments are not steerable and fixed at a particular angle, surgeons often struggle with gaining access to the surgical site, as well as with the alignment of the instrument tip for manipulation, suturing, or cutting of the tissues. If ‘x’ instrument is unable to reach the surgical site through a 3- or 5-mm incision, the surgeon tries again with ‘y’ instrument—a trial-and-error method that increases the procedure time.

To hasten the process, surgeons resort to unconventional methods— standing in unergonomic postures or manipulating the instruments in uncomfortable positions—that cause high pressure on the insertion portal (healthy tissue) of the patients and lead to surgeons hurting their wrists.

Similar issues permeate across laparoscopy Operation Rooms (OR) where steering the tip of bulky and complex instruments is a recurring pain for laparoscopic surgeons, especially in situations where they have to operate through small incisions with small trocars.

For decades, arthroscopic and laparoscopic surgeons have been using the same antiquated tools that not only limit their performance but spike a hospital’s OR budget (due to the excessive cleaning of instruments and lengthier surgical procedures).

After watching surgeons struggle with stiff and pre-bent instrumentation, Dr.ir. Gabriëlle Tuijth of, Ph.D., of the Delft University of Technology, was keen to bring about change. Starting in the year 2000, she began digging for solutions whilst collaborating with Dr.ir. Tim Horeman, Ph.D. (now Co-Founder and CTO of Surge-on Medical), and other fellow researchers, Dutch hospitals, and universities, who were collectively determined to deliver surgeons a modern instrument that matches their needs.

Nearly 20 years later, surgeons across the world have access to the Steerable Punch, a revolutionary, first-of-its-kind device that allows surgeons to perform arthroscopic knee surgery with just one instrument. The free-dimensional steerable instrument offers extra reachability in the knee joint, replacing up to ten established instruments and other functions, leading to simplified operation techniques, minimal tissue injuries, and fewer risk of infections. Ultimately, it can result in efficient ORs and surgeons, faster patient recovery, and cost savings for hospitals.

Although the device arrived in the market in 2019, The Steerable Punch is the culmination of an intellectual property portfolio built up by Surge-on Medical, a Netherlands-based medtech company that was established in 2015. Through four international patents on cable-free steering mechanism, detachability, and coupling mechanism, and practical applications, Surge-on Medical is building a host of innovative surgical tools that optimize and expand the operative performance of the surgeon to enhance the quality of care for the patient. “We are unique because our instruments are steerable and detachable, and therefore cleanable. Our products drive environmental benefits—due to the reduced amount of disposed plastics and metal—and surgical benefits through efficient, cleaner, and safer procedures. They could allow patients to recover faster from surgeries,” says Benno Benno Groosman MScBA, Co-Founder and CEO, Surge-on Medical.

The Steerable Punch enables surgeons to achieve the much-desired “steerability” thanks to Surge-on Medical’s patented Shaft Actuated Tip Articulation technology (SATA), developed in association with the Delft University of Technology.

Our products drive environmental benefits—due to the reduced amount of disposed plastics and metal—and surgical benefits through efficient, cleaner, and safer procedures

The platform technology is the core ingredient behind Surge-on Medical’s portfolio of products that have already exhibited the potential to replace all minimally invasive instruments in the market with “steerable, detachable, and cleanable technology.” While the Steerable Punch will serve the arthroscopy market, the soon-to-launch Steerable Grasper is designed for laparoscopic procedures.

The Steerable Grasper, slated for a late 2020 commercial launch, will be a cable-free alternative to other steerable devices in the laparoscopic market. Although the products solve the reachability issue for surgeons, they are built on mobility mechanisms controlled through complex handles that require specialized cleaning and sterilization systems. In contrast, Steerable Grasper is a lightweight, elegant instrument designed with a strong focus on usability and cleanability.

Making a Splash in Robotic Surgery

Meanwhile, Surge-on Medical is currently developing two Portable Laparoscopy Robot Systems (PoLaRS)—PoLaRS-VR (prototype), an interactive robotic surgery training system, and PoLaRS (proof-of-concept), the first easy-to-afford and portable, modular surgery robot. As revealed by Groosman, robotic surgery was not an initial focus of Surge-on Medical but became a point-of-interest after it was approached by a few robotic surgery companies. “While the Steerable Punch originated due to a real demand from surgeons, our endeavours in robotics emanates from industrial partners asking the question, ‘will your instrument(s) work in our robotic systems’?”

Turns out, it does.

Surge-on Medical recently collaborated on a research project with a publically-listed manufacturer in the medical robotics arena. Through the project, Surge-on Medical proved that their own steerable instruments are compatible and ready to be connected to market grade robots.

On the other hand, the complete PoLaRS system, as it fits in two portable suitcases, will be less expensive than current robots and has also the potential to bring robot-assisted surgery to remote areas, developing countries, and disaster or war zones. “Our portable robots will have the capability to perform high-quality surgery in areas that are difficult to reach,” adds Groosman. Also, unlike bulky and expensive robotic surgery products, PoLaRS can be shared by multiple hospitals, especially in rural countries where robotic surgery is unheard of.

Steering ahead, an exciting future awaits Surge-on Medical. Since 2015, the medtech company has received more than €650,000 in funding through grants, angel investments, bank loans, and award money. As Surge-on Medical takes its next step, the Dutch medtech company invites investors to partake in a lucrative opportunity. In partnership with aescuvest—which enables great health innovations through equity crowdfunding—Surge-on Medical is working on expanding its sales activities for its patent-protected product line. For the first time, a European cross border crowdfunding campaign based on a prospectus-approved securities offering enables private investors to invest online alongside with business angels and venture capitalists to benefit from the growth potential of early-stage growth companies.

Via aescuvest.eu, Surge-on Medical intends to complete their scale-up funding in January 2020 latest. Every investor will receive a stock option/equity in the company. “We are on course to making inroads into the 600m arthroscopy market, the 7.6b laparoscopy market, and 3.6b robotic surgery market. As we have done thus far, we will continue developing products by the surgeons, and for the surgeons,” concludes Groosman. 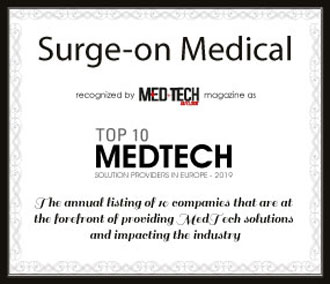 Description
Develops and sells patent-protected steerable, detachable, and cleanable minimally invasive instruments for arthroscopy and laparoscopy. One of the top MedTech Solution Providers in Europe, Surge-on Medical offers the Steerable Punch, a revolutionary, first-of-its-kind device that allows surgeons to perform arthroscopic knee surgery with just one instrument. The free-dimensional steerable instrument provides extra reachability in the knee joint, replacing up to ten established instruments and other functions, leading to simplified operation techniques, minimal tissue injuries, and fewer risk of infections. While the Steerable Punch serves the arthroscopy market, the soon-to-launch Steerable Grasper is designed for laparoscopic procedures